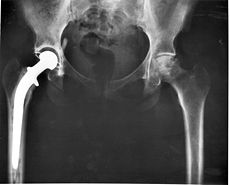 Prosthetic implant is a magnificent answer for the pains of people who suffers from arthritic hip, as changing their natural hip. One of disadvantages of the used implanted bones is its limitation in movement. The artificial joints erode by time, so some patients have to repeat the same operation and change the joints if they were young before the first surgery.

The used joints were metal-on-metal joints, and the patients body would form a layer between the layers, scientists were convinced that this layer is made from proteins.

A team of researchers that is composed of engineers and physicians from both Germany and the United States, they were able to analyse the layer between the metals and reached for the components, it is mainly from graphite carbon.

A new study, bringing together an interdisciplinary team of physicians and engineers from the United States and Germany, made a surprising finding about implants used in hip replacement surgery: Graphite carbon is a key element in the lubricating layer that forms on metal-on-metal hip implants. The lubricant has more in common with the lubrication of a combustion engine than that of a natural joint. The study was funded by the National Institute of Arthritis and Musculoskeletal and Skin Diseases (NIAMS), part of the National Institutes of Health.
To better understand what happens in the artificial joints—and consequently what might be improved upon—the scientist turned to metal joint components that had been removed in revision surgeries and a science called tribology, which focuses on the phenomenon of friction, lubrication and wear.
While researchers knew little about the layer, they assumed that it was from proteins in the body that entered the joint and somehow adhered to the surface of the implant. As such, it would be, similar to lubrication in natural joints.