This is the picture that will come to your mind as soon as you hear or read about wind turbines, wind turbines are of course a magnificent  source of clean power that would save our earth from pollution but the only problem with the usual wind turbines is that they need enormous open areas to be built. 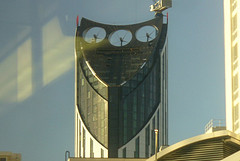 Then in the few last years came Aerovironment wind system, the Windspire and the Honeywell windgate  respectively, they don’t use large area but they all also harness the power of wind coming through one direction and don’t benefit of the wind coming from the other sides.

The new technology overcome those problems they don’t need large areas and the harness the wind coming from all directions, the IMPLUX it is a vertical axis turbine.

The key to the IMPLUX, which was designed by inventor Varan Sureshan, is the omni-directional shroud that forms the outer covering of the turbine and directs the wind from all directions up through the unit to turn an aerofoil propeller rotor like that used on horizontal axis wind turbines. The shroud, which wouldn’t look out of place in The Jetsons, consists of a series of fixed horizontal blades that are shaped to capture the wind and accelerate it up into the central chamber to turn the turbine rotor.

To stop the wind simply blowing straight through the shroud, the horizontal blades are angled to direct the wind upwards. Sureshan says the wind entering the bottom-most opening, which has the highest focusing ability, forms a “fluid dynamic gate” – essentially an air curtain – that blocks the wind entering on one side from escaping out the other, instead forcing it up a past the rotor.