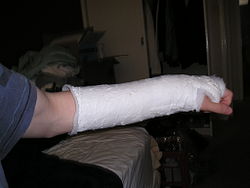 University of Georgia Regenerative Bioscience Center have announced about a new putty that will lead to much faster fractions recovery, using stem cells to produce protein that helps in curing the bones. The new fracture putty is still under trials on animals.

You can read more in the Dailymail.co.uk.Working with Dr John Peroni from the UGA College of Veterinary Medicine the team used a stabilising device and inserted putty into fractures in rats.

Video of the healed animals at two weeks shows the rats running around and standing on their hind legs with no evidence of injury. The RBC researchers are testing the material in pigs and sheep, too. The researchers hope the putty will revolutionise fracture treatment for injured soldiers.
However, more animal trials will need to before it can be tested on humans.Between 2009 and 2011 the group were awarded $1.4million from the U.S Department of Defense for testing the putty in sheep.
This year, they revealed bone can be generated in the animals in less than four weeks.