Honda has announced about a new system that will prevent the traffic jams, the new system will alert the drivers in distant cars about the traffic congestion so they can change their route. 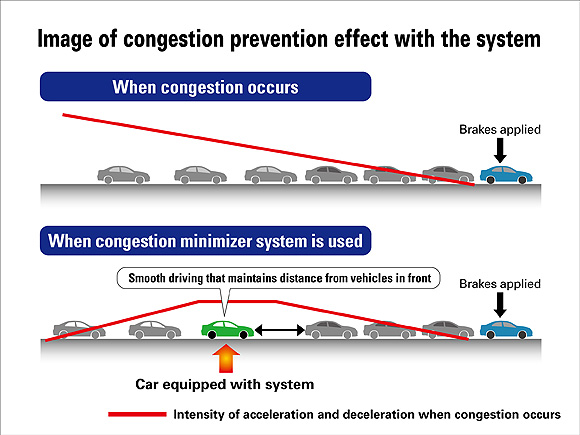 TOKYO, Japan, April 26, 2012 – Honda Motor Co., Ltd. announced the successful development of the world’s first*1 technology to detect the potential for traffic congestion and determine whether the driving pattern of the vehicle is likely to create traffic jams. Honda developed this technology while recognizing that the acceleration and deceleration behavior of one vehicle influences the traffic pattern of trailing vehicles and can trigger the traffic congestion.

In conjunction with the Research Center for Advanced Science and Technology at the University of Tokyo, Honda conducted experimental testing of a system utilizing the technology to detect the potential for traffic congestion. The test results demonstrated that the system helped increase the average speed by approximately 23% and improved fuel efficiency by approximately 8% of trailing vehicles.

Rather than providing information to help the driver avoid existing congestion based on current traffic information, the system monitors the acceleration and deceleration patterns of the vehicle to determine whether the driver’s driving pattern is likely to create traffic congestion. Based on this determination, the system provides the driver with appropriate information, including a color-coded display through the on-board terminal, to encourage smooth driving which will help alleviate the intensity of acceleration and deceleration by trailing vehicles, thereby helping to prevent or minimize the occurrence of vehicle congestion.

Moreover, the positive effect on minimizing congestion and fuel efficiency improvement can be further increased*4 by connecting the on-board terminals to cloud*2 servers to make the driver aware of and in sync with the driving patterns of vehicles ahead by activating the ACC (Adaptive Cruise Control)*3 system at the right time to maintain a constant distance between vehicles at the most appropriate interval.

Traffic congestion causes not only a delay in arrival time but also an increase in CO2 emissions and a higher potential for rear-end collisions. Striving to realize “the joy and freedom of mobility” and “a sustainable society where people can enjoy life,” as stated in the Honda Environmental Vision, Honda will work toward the establishment of a congestion-free mobility society all around the world.