A unique man made material could theoretically help in creating faster power transfer that can be used in laptops , cellphones and hopefully later in cars and elevators. The engineers of the Duke University have developed a theory for using metamaterials to help create more faster wireless power transfer.

This advance is made possible by the recent ability to fabricate exotic composite materials known as metamaterials, which are not so much a single substance, but an entire man-made structure that can be engineered to exhibit properties not readily found in nature. In fact, the metamaterial used in earlier Duke studies, and which would likely be used in future wireless power transmission systems, resembles a miniature set of tan Venetian blinds.
Theoretically, this metamaterial can improve the efficiency of “recharging” devices without wires. As power passes from the transmitting device to the receiving device, most if not all of it scatters and dissipates unless the two devices are extremely close together. However, the metamaterial postulated by the Duke researchers, which would be situated between the energy source and the “recipient” device, greatly refocuses the energy transmitted and permits the energy to traverse the open space between with minimal loss of power. 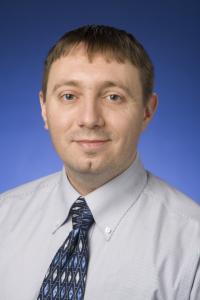 The results of the Duke research were published online in the journal Physical Review B. Urzhumov works in the laboratory of David R. Smith, William Bevan Professor of electrical and computer engineering at Pratt School of Engineering. Smith’s team was the first demonstrate that similar metamaterials could act as a cloaking device in 2006.
Just as the metamaterial in the cloaking device appeared to make a volume of space “disappear,” in the latest work, the metamaterial would make it seem as if there was no space between the transmitter and the recipient, Urzhumov said. Therefore, he said, the loss of power should be minimal.