The ancient Egyptians were possibly the first civilization to practice the scientific arts. Indeed, the word chemistry is derived from the word Alchemy which is the ancient name for Egypt. Where the Egyptians really excelled was in medicine and applied mathematics. But although there is a large body of papyrus literature describing their achievements in medicine, there are no records of how they reached their mathematical conclusions. Of course they must have had an advanced understanding of the subject because their exploits in engineering, astronomy and administration would not have been possible without it.

The Egyptians had a decimal system using seven different symbols. 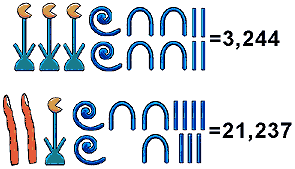 The conventions for reading and writing numbers is quite simple; the higher number is always written in front of the lower number and where there is more than one row of numbers the reader should start at the top.