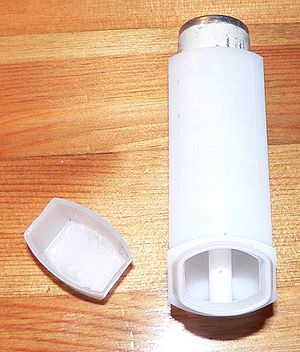 It is a small and sensitive device, it is the same size of a mobile, it is so sensitive that it can measure small amounts as one ppb (part per billion) of heightened levels signals, the latent inflammation spreads hours before a patient becomes aware that anything is wrong.

The device will allow patients to analyse their breath themselves and take the minimum amount of preventive medication when necessary.

The breath sensor, developed by Siemens, measures telltale rise in levels of nitrogen monoxide. NO is produced naturally in the body, and can signal the beginnings of inflammation in the bronchial tubes. If unchecked, the inflammation will constrict the airways and trigger an asthma attack.

When the user breathes into the device’s mouthpiece, the air first passes over a potassium permanganate catalyst, which converts any NO present into NO2. The air then flows over a film containing phthalocyanin, a blue dye which binds to the NO2 molecules, so that they stick to the surface of the film. This generates a voltage, which is detected by an underlying transistor. The strength of the voltage depends on the amount of NO2 present, which in turn equates to the NO levels and hence inflammation.