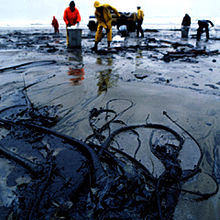 Oil spill is a leak of liquid petroleum in water surfaces. The oil spills can be a result of tankers sinking, offshore platforms or the diesel and gasoline leaks from the ships.

Oil spills is one of the great sources of water pollution, as it is considered a major factor of killing marine creatures as fish and sea gulls.

Cleaning oil spills is a very difficult assignment that takes days, weeks, sometimes months to be done. The technics that are used till today vary between chemical dispersion, mechanical containment or controlled burning.

The time needed to clean the water can be cut to the quarter by the new technology made by Elastec/American Marine. The main idea depends on the idea that plastic attract oil but don’t attract water.

Elastec was inspired by a gauntlet thrown down by the X Prize Foundation, which organizes privately funded competitions to spur technological advancement. It’s known for awarding a $10 million prize in 2004 to build a privately funded spacecraft.

Funded by activist Wendy Schmidt, who is married to former Google CEO Eric Schmidt, the Oil Cleanup X Challenge dangled a million-dollar purse to any company that could drastically increase the speed that oil is skimmed from water.

The industry standard is for oil skimmers to remove 1,100 gallons of oil per minute. The X Challenge set the bar at 2,500 gallons per minute.