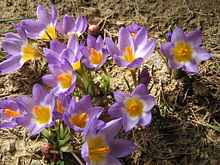 Crocus is a flower that is considered a genus in the iris family. The flower is already known as a toxic plant to human but is used as an anti inflammatory and anti cancer treatment, but it is not used widely due to its toxic factors.

Cancer researchers in the Institute for Cancer Therapeutics at the University of Bradford UK have reached a way to chemically use the crocus flower to a cancer treatment.

The new progress is using a system that will deliver the chemicals directly to the tumor, by using the chemical factor available in the plant called colchicine, the chemical cut down the blood supply to the tumor which cause its starvation and death. That wonderful progress will save the patient from the harms of the healthy tissues caused by the other treatments. The new treatment will be used as a bomb that targets the cancerous tumors.

The researchers, led by Professor Laurence Patterson, have found a way around the toxic nature of the chemical when it comes to healthy tissue in the body and determined a way to focus the toxicity towards the cancerous tumor. By attaching a chemical ‘tail’ to the colchicine molecule, the researchers have been able to deactivate the toxic properties until it reaches the targeted cancer. Cancer tumors contain an enzyme called MMP and this enzyme effectively removes the ‘tail’ and activates the colchicine. Once activated, the colchicine goes into action breaking up the blood vessels that feed the tumor and essential starve it. Because the drug is activated in the tumor, it does not affect outside tissue and no side effects have been noted.
At this time, tests have only been conducted on mice but the results have been remarkable. In mice testing, all mice have responded to the treatment and in as many as half of the studies, the mice appeared cured of the cancer. The drug is effective toward cancers that produce tumors and the researchers have tested breast, colon, lung, prostate and sarcoma tumors at this point.
Clinical trials on human patients are expected to being in as soon as 18 months and will be conducted at St. James’s University Hospital. The researchers hope that if the clinical trials prove successful, a new drug could be available within the next six to seven years.