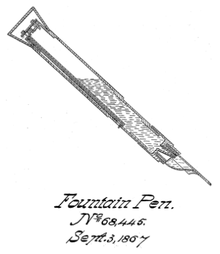 There was no alternatives for the cavemen than carving the stones to get their drawings, but when the ink was invented it gave a huge push to writing. The papyrus was the first papers invented by the Egyptians followed by the Chinese papers, while the ink appeared in China first then followed bu the Egyptian.

The Egyptians were the first to invest a writing tool which is stylus, they used it to carve shapes on papyrus. About 4500 years ago the Chinese “Tien-Lcheu” used soot from pinewood mixed with oil to make a black liquid, they used a bird feather to write on papers. Then the Chinese added to the previous ink gelatin made from the skin of animals.

Later the Indians made their own ink using burnt bones, tar, pitch and other materials.

By the beginnings of the first century the first metal pen was discovered by the Indians, it was similar to a quill but with metal point that had to be dipped in the ink every few moments.

In the fifth century in Rome appeared a type of ink made from iron-salts mixed with tannin from gall nuts.

On the twelfth century another type of ink was invented by using the water resulting from the soaking of dried barks of hawthorn branches for more than a week, then boiling the water after adding wine, the following step is to dry the liquid in the sun, the last step was to add iron salt to the mixture and heat it after adding wine.

By the tenth century the Egyptians invented the ink pen, as they invented a pen which held ink with a reservoir, this can be considered the first fountain pen. The fountain pen we know was inveted by the the American Duncan MacKinnon in the year 1850.

The fifteen century noticed the invention of the printing press, and a new type of ink was inveted using soot, glue, and water.

In the year 1500 the British Grey Knotts made the first pencil by cutting the graphite into sticks and rape the graphite sticks with sheep skin this was replaced later by wood in the year 1560 by the Italian Simonio and Lyndiana Bernacotti.

In the year 1906 the first mechanical pencil was invented by the engineer Slavoljub Eduard Penkala.

In the year 1938 the Hungarian “Laszlo Biro” invented the ball point pen.