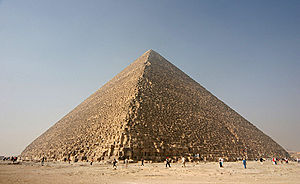 The Great Pyramid of Giza which was built to be a tomb for the Pharaoh Khufu in order to be buried into it after the mummification of the corps. The Great Pyramid is considered one of the wonders of the Ancient World that are still existing. The discovery of the Pharaoh’ chamber in the pyramid has been the interest of scientists for years now.

Far away from Egypt, in Hong Kong, a dentist called Ng Tze-chuen created a new tool that can discover the secrets of the Great Pyramid of Giza in Egypt as there are two narrow shafts in the pyramid which lead to Khufu’s tomb. The new innovation is inspired from a dental forceps that he created by himself in order to reach all crevices of the patients teeth.

Ng Tze-chen has organized a international team to unlock the mystery surrounding the doors that are blocking two narrow shafts in the Great Pyramid. These two shafts is said to be Pharao Cheop’s tomb, also known as Khufu.

Ng has designed 70 of his own tools in his dentist practice to properly grip the tricky crevices of the patient’s teeth. These tools have been an inspirations in creating the tools they will be using on the tomb. He said his team will mount tiny grippers on an insect-sized robot expected to gently trek the winding shafts of the pyramid, without causing damage to the walls.

The two shafts–that rise from the chamber in the pyramid– and their doors have puzzled archeologists since they were first discovered in 1872. There is some speculation that Khufu’s burial chamber might lie beyond the doors.

The robot will carry cameras and travel up the shafts that are so narrow only a small robot could fit. It will eventually drill through the two doors and record what it finds behind it.The international team plans to use the robot this spring, depending on when the license to do so will be issued.