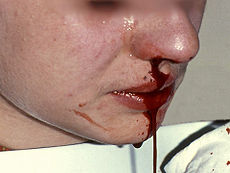 Why do we suffer nose bleeding?
There are several reasons for minor nose bleeding such as having a nose trauma, cold and irritation caused by allergies; While there are other causes for nose bleeding that you should take care of it such as bleeding disorders, tumors or high blood pressure. The frequent nose bleeding can be caused by hereditary hemorrhagic telangiectasia.