Scorpions are considered a type of arthropods, they have been on earth since hundreds of millions years, as the scientists had found fossils for scorpions that allowed them to determine that long period.

Scorpions are spread all over the world except in Antarctica, although they can live overnight in the freezer. Scorpions prefer to live in the sand, forests and deserts.

There are about 2000 species of scorpions; only less than fifty species of the scorpions are considered man killers. Scorpions are considered one of the predators for their main food the insects, arachnids and small vertebrates. But in the case of the lack of food, they can even live for a long period were there is no food at all by slowing their metabolism to the rate of one insect on the year. But they still keep some power that even at such time, when food appear they can spring very quickly.

The scorpions have a pair of pincers, it uses to grab the prey in order to suck it out. They cannot eat, but they only suck liquids, so the venom it uses on to paralyze the prey will also analyse the inside of the prey to liquid that the scorpion would suck out.

Scorpions are most famous with their venom injecting tale, the venom is secreted through two venom glands. They keep their tale in the upright position all the time. The scorpion attack its prey and paralyze it by injecting the venom through its stinger (barb) at the end of its tail, then kill the prey in order to eat it, they also use the same techniques in the cases of self defense. 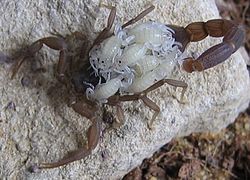 The female scorpion is able to produce up to a hundred offspring, the number varies by the species of the scorpion. The mother carries her young scorpions on her back for weeks until they can live independently.

If the male scorpion was not fast enough, the female scorpion would eat him just after mating. The female can also eat her young scorpions in the case of the lack of food.

Scorpions are considered from the nocturnal animals, as they hide during the day and get active and start looking for its food at night.

Some scorpions have from 6 to10 eyes, although their seeing sense is weak. But their sense of smell is very good. The scorpions as all arthropods have 4 pairs of joint legs. The scorpion have a chitin exoskeleton that include ultraviolet light that makes the scorpion glow at night.