Moon is the only satellite of the earth. The moon evolves around the earth in 27.3 days. The atmosphere of the moon can be considered space.

The American astronomer Alan Shepard (1923-1998) was on Apollo 13 in the year 1971, he managed to transfer the first color Television Broadcast from the surface of the moon. In that trip Alan Shepard drove two golf balls which landed miles away from him due to the absence of air on the moon. 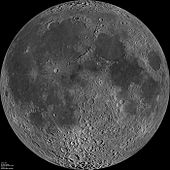 We can only see one face of the moon because the moon spin around itself exactly on the same period that it takes to revolve around the earth.

The dark parts that we can see on the moon are craters that are filled with basaltic lava due to old volcanoes.

Due to the low gravity of the moon, the astronauts can not walk but hop. The spacesuit weighs 30 pounds on the moon while it weighs 180 pounds on earth. Although it is limited, the moon’s gravity is the cause of tidal waves of the oceans on earth.