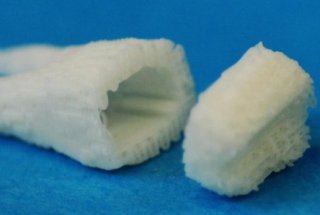 Usually traditional dental implants require a lot of time to heal and numerous visits to clinicians, which is why Dr. Jeremy Mao, a professor of dental medicine from the Columbia University Medical Center, decided to solve the problem.

He managed to come up with a revolutionary technique that would allow implants to be grown inside an empty tooth socket, in the mouth of the patient.
The professor began with a scaffold, the shape of which resembles that of a real tooth. It is worth mentioning that the scaffold is made of microchannelled natural materials filled with a growth factor.
When Mao experimented during the animal-model study he installed that structure in the empty tooth socket, making stem cells migrate onto the scaffold. The outcome was the growth of a new tooth along with the regeneration of periodontal ligaments. In addition, a new alveolar bone formed, reports Gizmag.
According to Dr. Mao, if the new method is applied, the patient will have a normal tooth grown in about nine weeks. Due to the fact that the method requires patient’s stem cells, the tooth will be able to continuously regenerate and last for a very long time.
Is n’t that amazing?! having a normal tooth grown in about nine weeks! what do you think about that?