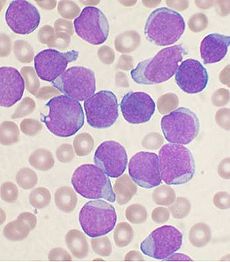 The University of Pennsylvania researchers have reached a new discovery, they started treating the most common type of leukemia, chroniclymphocyte leukemia, by another disease HIV. By Engineering the patient’s T-cells to destroy the tumors. The treatments by Chemotherapy and radiation can give the patients of leukemia for years. But the only cure for that kind of cancer until now is the bone marrow transplant, but there are lots of difficulties surrounding the transplant, first finding the suitable match, then the problems that can occur after the transplant includes that the patients have 50% chance to succeed, then they might suffer from severe infections and pains.

Dr. Carl June is one of the team leaders that reached that studdy. According to Dr. June, the process includes drawing blood from the patient, and extracting the T-cells, at which point a modified harmless version of HIV was added to the cells, and injected back into the patients in the study. Once back in the body, the modified cells act as “serial killers,” which attacked and destroyed at least 1,000 cancer cells in the 3 test cases.
The study reports that there was no immediate reaction after the re-infusion, however, after 2 weeks, flu symptoms were then noticed, a sign that the treatment was working. A year after the study, 2 of the 3 are cancer free, and the third is showing improvements.