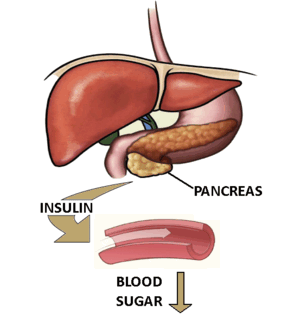 Scientists gave a big hope to the diabetes by trying to assure that diabetes can have the Insulin in easier and less painful  ways.

In the largest and longest study ever of an insulin pump with a continuous glucose sensor, patients who used the device achieved better control of their blood sugar than patients taking insulin injections.

Insulin injection that diabetics need to take once in every four months.

5- Insulin that can be Inhaled

Insulin powder would dissolve immediately after inhalation and the drug will be absorbed into the patient’s bloodstream for diabetes treatment.

While other Scientists have been making researchers on methods of testing blood glucose levels that don’t involve pricking the skin,  or that ease the pain of diabetes that suffer to track their blood sugar level.

A special tattoo that consists of nanoparticles, which is injected below the skin and monitors glucose level. Nanotattoo works as a glucose sensor, while the device that is worn over the tattoo shows the blood sugar measurements. Specially designed nanotubes sense glucose and fluoresce, which can be seen by near-infrared light on them.
Researchers say that the nanotattoo would give more accurate and continuous readings, which is very important for diabetics.  Another benefit of the new system is that the nanoparticles won’t be damaged by light exposure.

It is a timepiece that monitors glucose levels, it has futuristic design and it has a large LED display that has bright colors.

It is electronically controlled lancet and is claimed to be “virtually painless” by the manufacturer. It is supposed to accomplishes this by first sensing the presence of the finger, then “lances to a user-selected depth, to a smooth and controlled stop, that enables the lancet to reach the capillary loops without penetrating nerve endings and without generating pressure waves…”.

The Raman spectroscopy method involves testing the blood using near-infrared light, where vibrations between molecules would show chemical compounds.
Placing the light on the skin of an arm or finger would allow glucose levels to be read.