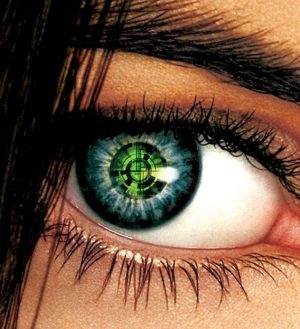 The Bionic Lens can imbricate computer image onto person’s vision. The new contact lens has a virtual display with an imprinted electronic circuit and lights using microfabrication and self-assembly methods that are usually used to produce semiconductor chips.
Scientists manged to introduce the tiny layers of metal in a circuit pattern, being only few nanometers thick on PET (polyethylene terephthalate) material. In order to incorporate LEDs (light-emitting diodes) they made small openings on the surface of the lens to create an image on the back of the retina, thus making the wearer to see the world differently. The lens was covered with harmless material to be worn on eyes like a common contact lens.

Seeing with the tongue

The new device aims to help restore the experience of vision for the blind and visually impaired by using nerves on the tongue’s surface to send light signals to the brain.
Humans use around two million optic nerves to transmit visual signals from the retina — the portion of the eye where light information is decoded or translated into nerve pulses — to the brain’s primary visual cortex.
Using the BrainPort device, visual data is collected through a small digital video camera, about 1.5cm (5/8 inch) in diameter, housed in the center of a pair of sunglasses worn by the user. From there, the data is transmitted to a handheld base unit about the size of a cell phone. The unit converts the digital signal into electrical pulses — replacing the retina’s function.
The base unit also incorporates features like zoom, light settings and shock intensity levels as well as a central processing unit (CPU).
Signals are sent from the CPU to the tongue via an electrode array about 9 sq cm (1.4 sq inch) that sits on top of the tongue. Each electrode corresponds to a set of pixels: white pixels, for example, deliver a strong electrical pulse whereas black pixels have no signal. Densely-packed nerves on the tongue surface receive the incoming electrical signals, which users describe as feeling a little like Pop Rocks or champagne bubbles.

Currently there are a number of electronic tools (such as voice-enabled GPS devices) that help blind people or those who are partially sighted, to interact with their surroundings.
The device is a small video camera that is installed at the end of a finger. The camera easily connects to a portable computer which is able to analyze the surroundings and identify and inform about the relevant objects. The mounting of the video camera can also vibrate providing a signal coming from the computer, which informs about something important.
If the camera identifies a nearby obstacle, such as a wall, it is able to trace out the shape in order to guide the person past such barriers.
Thanks to the image processing, the system is able to identify objects in detail. It can also spot light switches from a distance.