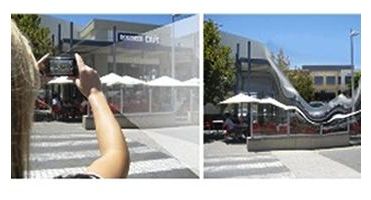 the University of South Australia in collaboration with Nokia started working on one of their latest inventions that would make it possible for users of cell phones to see through walls.

Their latest invention makes use of augmented reality (AR), being able to overlay graphics on top of real the video. The AR system comes in three types:

According to Dr Christian Sandor, Director of the Magic Vision Lab at UniSA, users prefer Meltvision over X-ray vision, due to a more appealing look, where structures appear to melt away. As for Distortvision, it changes the mobile video picture so that the objects that cannot be seen “bent” so the person could see them in the image.

It would be interesting to note that the researchers have also been working on an invention that would make it possible for users to see and sense virtual objects. The new technology is called Visuo-Haptic Augmented Reality and it allows an individual to manipulate a 3D object by making use of a head mounted screen and touch-based gadgets.

Dr Christian Sandor explains: “The current method for prototyping involves the development of a 3D design using a computer, which can be viewed on screen or printed out in what is a relatively static presentation.”

For sure so many of you guys would like to see this becomes a reality one day. Tell us what do you think about it. We are really keen to hear from you in that regard.

2 thoughts on “Latest Invention: Technology That Allows Users to See Through Walls and Melt Objects”