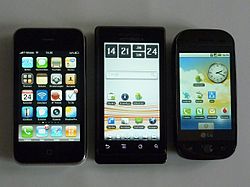 It is known that smart phones need more energy than the usual cell phones, for some countries the energy problem can be a cause of the non spreading of the smart phones.

Aalto University researchers have been making researches on that field and have reached to a new battery system called Indigo that can help in saving energy ffor people in order tobe able top use smart phones.

Smart phones are techno wonders, and they are also energy guzzlers, which is not a problem for people living in the developed world. However, their high energy requirements has stymied the adoption of mobile internet services in developing countries where mobile internet can be a real lifeline to the rest of the world. In Africa, for example, few people can access the internet from a wired connection but 90 percent of the population lives in areas with mobile phone network coverage.

There’s one problem though. Access to the power grid in Africa is limited. Therefore, users have trouble recharging their phones. This paradoxical situation inspired researchers at Aalto University in Finland to design a network proxy that’s claimed to cut power consumption of 3G smart phones by up to a cool 74 percent. The researchers say it serves as a middleman for mobile devices to connect to the internet and it handles the majority of the data transfer for the smart phone.

The case study conducted in 2011 at Aalto University focused on three East African countries: Tanzania, Uganda and Kenya. The researchers believe their optimized proxy solution could be easily deployed across a mobile network and in areas without reliable sources of electricity.

They also point to mobile optimized websites, HTTP compression and more efficient use of data caching as potential ways of alleviating the problem.

Aalto University researchers are not alone in their quest to increase access to mobile technology outside the developed world. Recently, a British company called Eight19 announced a pay-as-you-go solution called IndiGo, which it is marketing as a personal electricity system for the developing world. A combination of solar energy and mobile phone technology, it allows users to light their homes and charge mobile phones as a service, paid for using scratch cards.