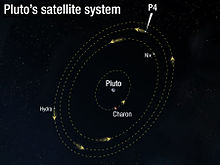 The newly discovered moon, which has been provisionally designated as P5, was detected in none separate sets of images taken by Hubble’s Wide Field Camera 3 between June 26 and July 9. It is estimated to be irregular in shape, measuring six to 15 miles (9.6 to 24 km) across, and is in a 58,000-mile (93,342 km) diameter circular orbit. The orbit is assumed to be on the same plane as other satellites in the system, resulting in the five moons creating what team leader Mark Showalter of the SETI Institute describes as “a series of neatly nested orbits, like Russian dolls.”

That such a complex collection of satellites is orbiting such a small planet – it’s roughly 1,433 mile (2,306 km) diameter is around 66 percent that of the Moon – has intrigued the team, who say this latest discovery provides additional clues as to how the Pluto system formed and evolved. The smart money is on the theory that Pluto’s moons are the result of a collision between the dwarf planet and another large Kuiper Belt object billions of years ago.

Following the discovery of Charon, Pluto’s largest moon, in 1978 in observations made at the United States Naval Observatory in Washington, D.C., Hubble uncovered two additional small moons, Nix and Hydra, in 2006, and another, P4, in 2011.

This could pose problems for the New Horizon spacecraft, which will be moving past Pluto at a speed of 30,000 mph (48,280 km/h) and could be destroyed in a collision with orbital debris the size of a ball bearing.