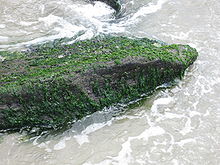 Scientists have searching for other sources of biofuels instead of those that are available now that are made from eatable sources.

Researchers from Bio Architecture Lab (BAL) announced that they reached a new technology that will use seaweed as a source of a cost effective biomass fuel. They reached a way to engineer a microbe that is able to extract the sugars in seaweed and convert it to renewable fuels and chemicals.

Because of its high sugar content, the fact it doesn’t require arable land or freshwater to grow, and is environmentally friendly, seaweed is seen as an ideal global feedstock for the commercial production of biofuels and renewable chemicals. According to BAL, less than three percent of the coastal waters globally is all that’s required to produce enough seaweed capable of replacing over 60 billion gallons (227 billion liters) of fossil fuel.

The BAL team’s breakthrough, which could help make this underutilized resource much more economically attractive, centers around an enzyme that is able to unlock and metabolize the polysaccharides within the seaweed.

BAL was a co-recipient of an award for the development of a process to convert sugars from seaweed into isobutanol from the U.S. Department of Energy’s new Advanced Research Projects Agency – Energy (ARPA-E).