A new iPhone application, which rates a person’s physical “unattractiveness” by analyzing photos of the face, is climbing up Apple’s app store rankings.IPhone Cell Phone Purifier Addressing the problem of disgustingly filthy, germ-laden cell phones, DoCoMo has built a prototype cell phone with built-in air purifier. The “Plasmacluster” uses an ion generator that can clean the air within a 12-inch radius of the phone. Hopefully the  device can be slimmed down.

Water powered cell phones Samsung  plan to use water as a power source  make fuel cell batteries that can power anything you can use in your pocket (cell phone, radio, mp3, etc). 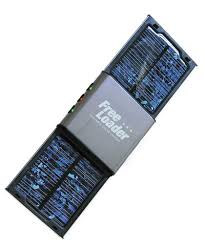 It is a smart looking, versatile device that charges a multitude of the latest mobile gadgets for free using Solar Energy. The FreeLoader 8.0 not only charges the latest two most popular gadgets from Apple but also charges devices such as digital cameras, iPods, PDAs, PSPs and mobile phone. The ensured batteries never run flat, the Freeloader 8.0 has an extra function which allows it to simultaneously charge its own internal battery which holds its charge for up to three months. It has  extra sensitive solar panels which  make it especially efficient at absorbing light in cloudy and dim conditions.