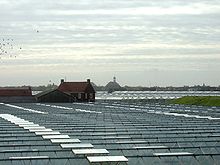 The greenhouse is the building in which plants are grown. The greenhouses vary in size very small to huge areas and the material that covers it could be either glass or plastic.

In some countries the greenhouses are built in huge areas, so considering to benefit from those areas in other purpose could be a breakthrough.

ULMA Agrícola consortium and Tecnalia research center in Spain have produced new photovoltaic solar panels that can cover the greenhouses and generate electricity as well without allowing the shades to effect the plants inside the greenhouse.

Depending on the season of the year, solar radiation can be diverted by taking advantage of the annual oscillation in the height of the sun’s trajectory; this is achieved through a lens-based optical system. Without the need for any solar mechanical monitoring, the technology allows the needs imposed by any crop to be met. So during the winter (October-February), the light inside the greenhouse, a key parameter for correct plant development, barely falls. But in summer the optical system diverts solar radiation towards the photovoltaic cells that make up the module, thus achieving a dual aim: to provide the greenhouse with cooling during the critical period of high temperatures and to increase electricity production through the photovoltaic system.
Right now, tests are being carried out in an ULMA Agrícola greenhouse belonging to the Neiker-Tecnalia R+D centre and located in Derio (Bizkaia, Basque Country). The crops selected for the initial tests are tomato and pepper. These two crops have been selected for the following reasons: they are two of the most common worldwide, they require a very large amount of light, and they are high added-value products within greenhouse agriculture.
In the tests conducted throughout the summer, the most critical parameters of the crop were measured, like total and PAR radiation, humidity and temperature. In addition, crop quality and production in the photovoltaic module were monitored by comparing them with data obtained under a normal glass roof. Positive results were obtained, and between mid November and the end of March 2012 a winter test is due to be carried out in which the same values will be monitored and from which similar results are expected to emerge. As regards electricity production, the first measures point to a 15% annual improvement over a standard photovoltaic system.
So the new module allows photovoltaic equipment to coexist with crops. What is more, it acts as an element for the seasonal control of the radiation and interior temperature of the greenhouse, apart from constituting additional support for the farmer’s economic activity through the sale and/or private use of the energy obtained.
The technology developed enables the problems associated with winter over-shading and summer radiation to be avoided in a simple, robust and effective way. Having validated this in the field using ULMA Agrícola greenhouses, the consortium is aiming to have a product ready to be marketed by the second half of 2012.