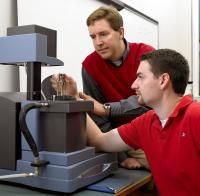 Material repairing itself,  is magnificent thing that scientists have been trying to approach for some time now,  because it is going to save in raw materials by expanding the life spam of the materials, finally some researches have reached this point,  polymers is a large molecule composed of repeating structural units.

The technology has evolved into a system that embeds catalysts and microcapsules containing a liquid healing agent within a composite. As cracks develop in the composite, they rupture the microcapsules and release the healing agent. The healing agent contacts the catalyst and reacts by forming 3-D polymer chains that fill the cracks. That increases material lifetimes and reduces maintenance.

Researchers at Arizona State are working on a material that can detect when it is damaged and heal itself.  The material uses what the researchers are calling ‘shape-memory’ polymers and have a fiber optic network embedded within them, which acts as the damage sensor as well as the heat delivery system.

The polymers return to a pre-defined shape when heated to a certain temperature, and when damage is detected, an infrared laser sends light through the network to the damaged area, triggers the shape-memory, and commands the area to repair the crack or tear regaining up to 96 percent of its original strength.

Polymer Healing itself by Heat

A new polymer material that can repeatedly heal itself at room temperature when exposed to ultraviolet light.

Researchers at Carnegie Mellon University and Kyushu University have reached a new material which heals itself.  When the material is pressed together and exposed to UV light, it heals itself.

The researchers were able to cut the same block into pieces and put them back together at least five times.  CMU chemistry professor Krzysztof Matyjaszewski, led the research team.

The polymer can only repair itself in an oxygen-free environment, so the researchers had to carry out the UV treatment in the presence of pure nitrogen. But they hope to develop polymers that heal under visible light and don’t require nitrogen, which should open up many practical applications, including products and components that heal after suffering minor damage.