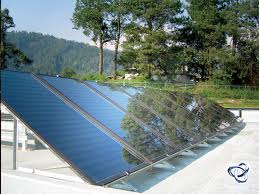 Scientists of Cambridge University have reached a new solar cell that can harness the power of photons and turnning the photons to electrons. The solar cells are made from lead sulphide nanoparticles and pentacene, the new development could lead to better solar panels.

The solar cell could increase the maximum efficiency of solar panels by more than 25 per cent, according to the scientists from the university’s physics department.

Solar cells work by absorbing energy from particles of light, known as photons, which then generate electrons to create electricity.

Traditional solar cells are only capable of capturing part of the light from the sun and much of the energy of the absorbed light, particularly from the blue section of the light spectrum, is lost as heat.

This inability to simultaneously extract the full energy from the light spectrum means that traditional solar cells are incapable of converting more than 34 per cent of the available sunlight into electrical power.

Typically a solar cell is able to generate a single electron for every photon captured. However, by adding pentacene (in a process called singlet exciton fission) the solar cells can generate two electrons for every photon from the blue light spectrum.