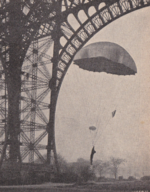 The idea of parachuting is to slow the fall of the human by creating a drag. The parachute is usually made from nylon because it has the advantage of being light and strong.

Paul Letteman and Kathchen Paulus were the first to reach a way to fold the parachutes and pack it in a bag.

In the year 1907 Charles Broadwick reached to the idea of pulling the parachute out from the bag using a static line. Grant Morton made a successful jump from a plane in the year 1911, while Franz Reichelt failed to make a jump from the Eiffel tower in the year 1912. The Slovakian inventor Stefan Banic invented in the year 1914 an actively used parachute.

Parachute is the common equipment in several sports now as parachuting, skydiving, suit-jumping and base-jumping.
Andre-Jacques Garnerin was the first to start skydiving in the year 1797.
In the year 1919, Leslie Irvin was the first to make a free-fall.
In the year 1960, parachute jumping (parachuting) was treated as a sport.
In the year 2012, Gary Connery the British stuntman started the first suitjumping or wing suit.
The previous parachute uses are from planes or hot balloon in the the case of Andre-Jacques Garnerin while the base-jumping is using a the wing suit and jumping from a high base.