Rosary Pea The most dangerous plants on earth

The rosary pea  may sound sweet and downright pious, but it’s actually one of the most dangerous plants on earth. Its seeds contain a particular lectin known as abrin; if chewed and swallowed, death will follow shortly. The seeds are easily identified with their distinctive bright red jacket and single black dot (almost like a reverse Black Widow spider). Abrin, which does its damage by inactivating ribosomes, is one of the most fatal toxins on earth. After the  vomiting, fever, nausea, drooling and G.I. dysfunction but before the bizarre hyperexcitability, edema and fatally convulsive seizures, renal tubular degeneration, bladder and retinal hemorrhage and widespread internal lesions typically develop.

The nickname for monkshood is actually “wolfsbane”. That’s owing to its once common use by farmers as a very effective wolf extermination tool. (Not to be left out, fowl are also fatally affected by the related hensbane.) The monkshood has the distinction of evidently being the bane of many creatures: its nicknames include womensbane and leopard’s bane, though it is also known as blue rocket and devil’s helmet. It is technically part of the aconitum  genus, of which there are more than 250 species. The wolfsbane used to be a popular werewolf detection tool, by the way. (Status was determined by holding the flower near the alleged’s chin; a yellow-tinged shadow on the skin was thought to be confirmation.)

The aptly-named Bushman’s poison  has famously been used by the Khoisan of South Africa to poison the tips of their arrows. Though the plant produces pleasantly scented flowers and a tasty plum-like berry, the milky sap can be fatal. The leaves, however, have medicinal properties. Bushman’s poison is also known as the winter sweet.

What could be sweeter than the sound of an angel’s trumpet? Perhaps the moaning agony of a trip that won’t end. Related to petunias, tomatoes and potatoes, the angel’s trumpet (datura stramonium) is a highly effective hallucinogen, but should not be consumed for recreational purposes as it can also be lethal. According to wikipedia: “The active ingredients are atropine, hyoscyamine and scopolamine which are classified as deliriants, or anticholinergics. Due to the elevated risk of overdose  in uninformed users, many hospitalizations, and some deaths, are reported from recreational use.” This common plant also goes by many other names, including jimson weed, stink weed, loco weed, and devil’s snare. One 18-year-old who was house-sitting alone for his uncle recounts how he decided to prepare some angel’s trumpet tea  in curiosity and almost died (a friend burst in on him convulsing on the bathroom floor and the authorities assumed he was on an acid trip).

The poison hemlock famously drunk by Socrates is deadly, but the water hemlock is just as fatal. According to the USDA, water hemlock or poison parsnip is “the most violently toxic plant in North America”. The flowers and stems are safe, but the stalky roots contain chambers that are full of a deadly sap containing the convulsant cicutoxin. Grand mal seizures are followed by a quick death if even a tiny amount is consumed.

Also known as the devil’s cherry, black cherry, great morel and belladonna, the nightshade  is toxic from tip to top. Containing atropine, a deadly alkaloid, those who ingest even a small amount of the plant will soon notice they have lost their voice. Respiratory trouble and convulsions follow. The plant is problematic because its cherries are so sweet and children are frequently attracted to the wild fruit. Strangely, horses, birds, sheep, goats and pigs seem to be immune to the effects of nightshade. Nightshade poisoning is treatable with an emetic if treatment is sought swiftly. Plutarch spoke of armies being wiped out by nightshade, and legend has it that Macbeth’s soldiers poisoned the invading Danes with wine made from the sweet fruit. 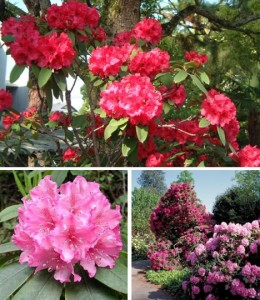 The toxic rhododendron, a stalky tree-like evergreen shrub with large, brilliant blooms, is famously seen throughout much of the Pacific Northwest and is the state flower of Washington. Its relative, the popular garden shrub azalea, is also poisonous. Both plants contain andromedatoxin, which can cause severe pain, lethargy, depression, vomiting and nausea, progressive paralysis, coma and eventual death. All parts are deadly.

The oleander is the most deadly plant in the world. It is also tremendously popular as a decorative shrub. Just one leaf can kill an adult, and fatal poisonings have resulted from minimal exposure to the twigs, blooms and berries. The plant contains numerous toxins, including nerioside, oleandroside, saponins, and cardiac glycosides. Though native to parts of the Mediterranean and Asia, it is now widely cultivated throughout the world. Fatalities among horses and other livestock are common. Once ingested, oleander goes to work simultaneously on the nervous system, the cardiovascular system, and the digestive tract.

A otherworldly name and a plant with often fatal effects. The seeds of this Eastern North American drupe (stone fruit) are extremely toxic to humans, although birds can eat them. Moonseeds first cause paralysis but are fatal in larger doses and/or if treatment is not sought immediately.

This plant, also called the spurge laurel, is a favorite ornamental shrub in Europe. This drupe-producing evergreen with waxy, attractive foliage and gorgeously fragrant blooms is also highly toxic. Consumption of the leaves or red or yellow fruits will first cause nausea and violent vomiting, followed by internal bleeding, coma and death. The daphne plant is rich in the toxin mezerein.

Castor oil – for anyone unlucky enough to have been force spoon-fed this healthy yet disgusting fluid as a child, you may be surprised to learn that an ingredient in the castor bean  just happens to be the deadliest plant poison on earth. Literally. Just one tiny castor bean is enough to kill an adult within a few minutes. Castor oil is made safe (but not palatable) with the removable of the lethal compound known as ricin. Amazingly, castor bean plants are grown for decorative purpose all over the place, particularly in California.

You don’t wanna mess with plants, do you?

To read more about that issue, please visit the following link: