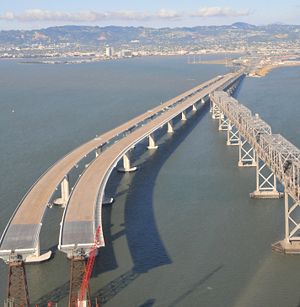 The popularity  of the renovation that Bay Bridge had, after Rael San Fratello, a San Francisco architecture firm. Now the company looks forward to do a similar makeover to the deserted east span of the Bay Bridge. The abandoned 1.5-mile-elevated railway of the Bay Line Bridge has transformed into a popular public park, with surrounding retailers reporting a significant uptick in business.

The proposed Bay Line project would be a linear park that includes bicycle and pedestrian access, housing and cultural activities, such as theaters, commerce and museums, as well as 1.92 miles of bicycle lanes, sporting facilities, such as tennis courts, climbing walls, squash courts, and skate parks. Besides, designers thought about enriching the whole structure with orchards, gardens, and meadows.

The entire project could cost about $350 million, which could be regained over several years through rental costs as well as bridge tolls.

Also there are some Fears that the east span of the bridge will not be able to resist an earthquake. However, the same thing was said about the High Line park project.