A robot suit designed to help patients recover from partial paralysis. The suit contains virtual muscles. It will aid in the rehabilitation of stroke victims suffering from partial paralysis by moving their limbs. Sensors at the elbow and wrist allow a healthy arm to control the eight artificial muscles, which are powered by compressed air, on the paralyzed side. 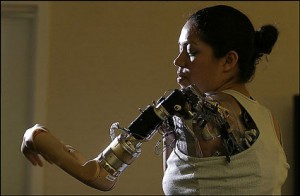 While there are robots to help patients suffering from severe paralysis there has been a development of prosthetic limbs using mechatronic elements, which are usually used in creating robots. These elements turn simple prosthetics into functional substitutes for missing body parts.
The artificial muscles can even work in helping regain control over eyelids of the patients that suffered spinal injuries or have nervous disorders such as Bell’s palsy. There are a number of different disadvantages for people who lost control over their eyelids, including the fact that eyes can become ulcerated, which can lead to blindness, a polymer muscle attached to the skull pulls on cords that hook up to the upper and lower eyelids. In case a person attempts to close their eyes, the move generates electrical activity in the muscles that would close the patient’s eyelids. The polymer muscle identifies this action and contracts, dragging on its cords to entirely close the eyelids. 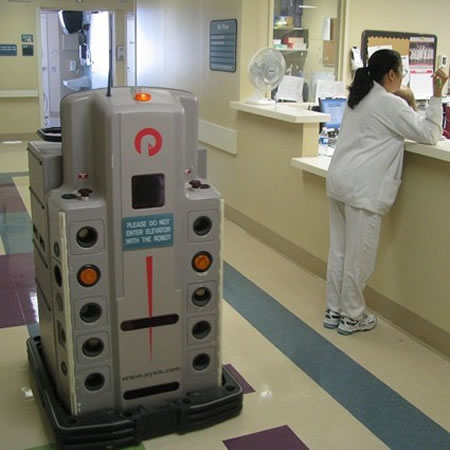 Panasonic has designed a new robot that helps deliver pharmaceutical drugs to patients. The robots will have access to the medical records and prescriptions of patients and will do the grunt work of front desk clerks and pharmacists. The robot is able to distribute drugs to patients. In addition, according to a Japanese online news source, the robot will have the ability to complete prescriptions.
To be able to write prescriptions and dole out drugs, engineers will connect the machine to electronic medical online records. Thus the robot will scuttle across Japanese hospitals and pick prescriptions for the patients. The robot will need 2 hours to complete the whole job in a hospital with 400 beds. It is worth mentioning that in general it takes about 4 hours for a skilled pharmacist to do the same job.

Robots are set to take over as assistants in the operating room.

Robot to Help Neurosurgery. Surgery can take a huge step towards the future due to a new surgical robot system, developed at University of Calgary. Surgeons’ mistakes will no longer take place because the NeuroArm is going to upgrade the level of neurosurgery as well as other branches of operative medicine. A surgeon, through a computer workstation controls the robot. The NeuroArm works with real-time MR imaging. It helps surgeons see and works on a microscopic scale.

The robot was unveiled in Calgary in April 2007, NeuroArm is the brainchild of Dr. Garnette Sutherland, professor at the University of Calgary’s Faculty of Medicine and neurosurgeon for the Calgary Health Region.