A new study published in IOP Publishing’s journal 2D Materials has proposed using graphene as an alternative coating for catheters to improve the delivery of chemotherapy drugs.

Source: Improving the delivery of chemotherapy with graphene

This shows that existing materials is being used in new ways all the time, and that is what true innovation is all about. Finding new uses lot already existing technology is a whole lot easier than coming up with new materials.

Dr Zakaria Moktadir a researcher at the University of Southampton has reached a new use for graphene field effect transistor (GFET) that will improve the performance for future electronic devices, it can also replace silicon.

Using  geometrical singularities-such as sharp beds and corners-  in bilayer graphene nanowires  which allows the current to be turned off efficiently. The new way is about 1000 times higher in ratio to the current silicon complementary metal oxide semiconductor (CMOS).

Or will it be Molybdenite that will replace Silicon?

Researchers in Switzerland have made high-performance transistors out of this form of molybdenite. Molybdenite is a mineral that has been discovered recently for its electronic properties. The new discovery can lead to more efficient flexible electronics, high-performance digital microprocessors or solar cells.

A very thin two-dimensional molybdenite has electrical and optical properties that are much better than those found in three-dimensional forms of the material. 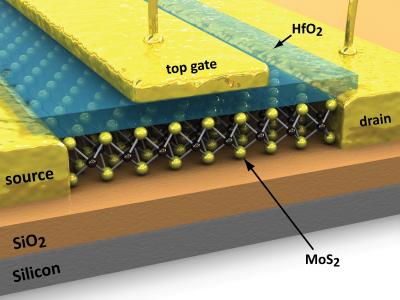 As eurokalert published a discovery made at EPFL could play an important role in electronics, allowing us to make transistors that are smaller and more energy efficient. Research carried out in the Laboratory of Nanoscale Electronics and Structures (LANES) has revealed that molybdenite, or MoS2, is a very effective semiconductor. This mineral, which is abundant in nature, is often used as an element in steel alloys or as an additive in lubricants. But it had not yet been extensively studied for use in electronics.