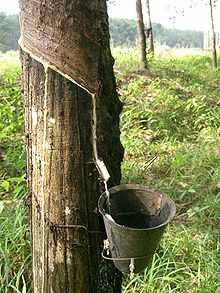 Rubber is an elastic hydrocarbon polymer that is extracted from certain kinds of trees that grow in damp climate as, Hevea Brasiliensis (Para Rubber Tree) which is the most common source, and there are other kinds which are less common.

The rubber is produced from a milky latex that is secreted from trees as a normal reaction after the tree is exposed to an injury in its bark.

From more than 3500 years ago, the first people to discover that rubber could be extracted from trees and used, are the South America’s Indians. They made balls out of rubber by boiling it. they played a game called Tlachtlic, which is a mix of football and basketball. Later in the 15th century Christopher Columbus, the famous Italian explorer, navigator and colonizer for the welfare of Spanish Kings noticed and recorded that the natives were playing with a rubber ball.

The first to transfer the discovery of rubber to Europe was the French Charles Marie de La Condamine in the middle of the 18th century.

In the year 1770, Joseph Priestley (1733-1804) an English philosopher and chemist was the first to discover a practical use of rubber, as he discovered that a piece of rubber can erase the pencils writings. This was the invention of the rubber and give the rubber its name.

In the year 1791, Samuel Peal was the first to manufacture waterproof clothing and footwear. By making a sort of fabric made from a mixture of rubber and the material turpentine.

Till the year 1839, rubber was used in its natural shape. But it was noticed that in summer, the rubber was flexible and viscous, while in winter it was fragile and tough. At that year a major leap happened in the discovery of the applications of rubber. In that year Thomas Hancock (1786-1865) an English inventor, invented the vulcanized rubber. In the same time, Charles Goodyear (1800-1860) an American inventor, was trying to mix several materials to rubber to find useful and practical uses for rubber. When by accident a mixture of sulphur and rubber, which was considered another failure, fell on a stove and caused the formation of vulcanized rubber. Vulcanization improves the resistance and flexibility of the rubber, and prevent its crumblings.

In the year 1876, Henry Wickham transferred thousands of the seeds of the rubber to the south-east of Asia, which became now the main source of natural rubber. The Africans started planting rubber recently, not more than 100 years ago.

In 1879, Gustave Bouchardat (1842-1918) a French chemist and physician, invented synthetic rubber. Which later helped in the increase of motor vehicles when the first synthetic tyre was manufactured in the year 1890.

In the year 1905, George Oenslager a chemist discovered that the derivative aniline accelerates the vulcanization.

Starting the year 1909 several kinds of synthetic rubber have been invented all over the world.