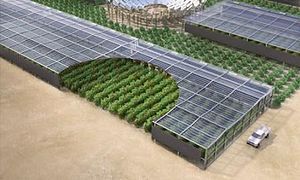 The Sahara Forest Project, is a big dream coming to reality. It aims to create green oases in desert areas by producing fresh drinking water, food and fuel. The Jordan-Norway agreement may save that dream, the agreement is to build the project in Aqaba, near the Red Sea in Jordan on a 200,000 square metre site in 2012.

The idea of the project is to provide saltwater to the greenhouse to grow vegetables and algae for fuel. Water piped from the Red Sea will cool air flowing into the greenhouse, providing good growing conditions for the crops. The air will then be passed over pipes containing seawater heated by the sun. The resulting hot, humid air will finally meet a series of vertical pipes containing cold seawater, causing fresh water to condense and run down the pipes to collectors below. This fresh water will be heated by a Concentrating Solar Power Plant to provide steam to drive a turbine, generating electricity. In turn, the electricity will be used to power the greenhouse’s pumps and fans. The water will also be used to grow crops around the greenhouse. The excess heat generated by the solar power plant will be used to produce drinking water through desalination.