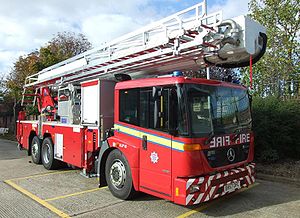 First the firemen used a hawk  that they hung on the windows of the burning buildings, then they would climb to save humans inside the buildings. Then came the ladder which is much more faster and effective. But now  Orville Douglas Denison came up with the new idea of escalators that will make the rescuing of the people more quickly than before.It consist of a combination conveyor belt and a hydraulic ladder that could extend as high as 113 feet. It draws additional rungs from inside the base unit, using a system with rungs on rollers that slide on tracks, each roller moves independently and is attached to a spring-loaded cable that keeps the line taut as the rungs run up and down the ladder at 200 feet per minute. The ladder could lower four people to the ground in under four minutes instead of 15 minutes in the nowadays methods. It is important that we mention here that the new system can be fitted to the fire trucks, that we are using today.

Sin Sun Ho, has a great idea to help the trapped people on the top of tall towers and buildings that are on fire. Most ladder trucks will have a maximum height of seven to ten stories, what about those who are trapped in higher stories, Sin came with an idea to help those.

Installing  a Rapunzel system on each floor near a window could solve this problem. It easy to use after it is  fixed tight near the window. The device consists of a small canister containing a handle attached to a high tension cable. The person  using it has to place his hand inside the canister and grips the handle inside, while a cloth strap helps to keep the hand tight and in place, then the person trapped lower himself or herself out over the edge of the building as the cable in the Rapunzel drop them inch by inch to safety.

The Firefighters Assistance Robot is a small device resembling a miniature tank and measuring just 12.5 cm in diameter and weighing 2 kg. It can travel on its 2 wheels at 1 foot per second and withstand a fall of over six feet. It can also survive temperatures as high as 160 C (320 F). The operating time of the robot inside a burning structure is up to 30 minutes. This is Hoya Robot, which was developed by a South Korean firm.

This robot can inform the firefighters outside the burning building what is going inside the building and it can also look for trapped people, because it can roll through the fire take pictures.

The small robot is pull a fire hose and spray water to help extinguish the fire, it is also provided with light and camera that help firefighters know where are the trapped people before entering the building. The robot also gives them enough information to decide on the safe routes, and quickly develop a rescue plan.