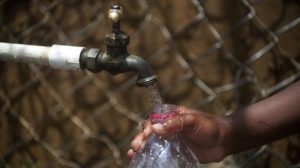 The majority of people on Earth will face severe water shortages within a generation or two if pollution and waste continues unabated, scientists warned at a conference in Bonn Friday.

“This handicap will be self-inflicted and is, we believe, entirely avoidable,” read a document entitled The Bonn Declaration issued at the close of the four-day international huddle.

The conference sought to assess the evidence of man’s impact on freshwater resources, which constitute only 2.5 percent of the total volume of water on Earth.

Currently, an estimated third of the world’s seven million people has limited access to adequate fresh water, according to conference delegates.

“In the short span of one or two generations, the majority of the nine billion people on Earth will be living under the handicap of severe pressure on fresh water,” said the declaration.

The nine billion mark is widely projected to be reached from about 2040.
“These self-inflicted wounds have long-term legacy effects that are not easy to turn around.”“We are flying the red flag out of our conference here,” Charles Vorosmarty, co-chairman of the Global Water System Project research body that hosted the meeting, said in a teleconference from Bonn.

The declaration points out that humanity uses an area the size of South America to grow crops and another the size of Africa to raise livestock.