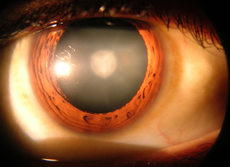 Cataract is the cloud that affect the eye lens and cause its opaqueness and at the end losing vision. The treatment of the cataract can be using eye drops or by surgery. In the surgery the surgeon remove the lens injured by the cataract and replace it with a plastic lens. The patient whom suffer from cataract have problems with seeing colours, it was believed that after changing the lens to crystalens would give the patient his sight back, but the experiment of Komar proved that he got a better sight than before the surgery.

Cataracts are known to have a detrimental effect on color perception, but in Komar’s case, he didn’t just regain his old acuity: The Crystalens implant he received has given him the ability to see into the ultraviolet spectrum. While friends and family were initially skeptical of such claims, Komar secured the help of an HP engineer with access to a Monochromator; a device capable of projecting light in 10nm wavelength increments. Test results confirmed his perception. Anecdotal evidence indicates that he’s not the only Crystalens patient to see ultraviolet wavelengths following the procedure.
The fact that Komar can perceive ultraviolet light post-operation is evidence of both the brain’s plasticity and the fantastic complexity of color processing. Ultraviolet rays are normally blocked by the eye’s lens; they aren’t ignored by the retina or somehow filtered out by the brain. The visual cortex requires exposure from birth to develop properly. Studies indicate that individuals who regain their sight after years of total or near-total blindness have significant problems performing certain tasks. When we talk about color reproduction, we typically talk about the RGB (Red/Green/Blue) or trichromatic model that describes how these three spectra can be used to form every visible color. As it turns out, the RGB model accurately describes what the eye sees — but not what the brain processes.