Selenium is a natural and cheap element, although it is not used as an antibiotic it is able to fight bacteria. Brown University researchers have used selenium nanoparticles to cover polycarbonate it was able to fight Staphylococcus aureus bacteria. 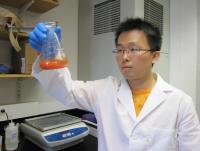 For this study, Webster and first author Qi Wang grew selenium nanoparticles of two different size ranges and then used solutions of them to coat pieces of polycarbonate using a quick, simple process. On some of the polycarbonate, they then applied and ripped off tape not only to test the durability of the coatings but also to see how a degraded concentration of selenium would perform against bacteria.

On coated polycarbonate — both the originally coated and the tape-tested pieces — Wang and Webster used electron and atomic force microscopes to measure the concentration of nanoparticles and how much surface area of selenium was exposed to interact with bacteria.

One of their findings was that after the tape test, smaller nanoparticles adhered better to the polycarbonate than larger ones.

Then they were ready for the key step: experiments that exposed cultured staph bacteria to polycarbonate pieces, some of which were left uncoated as controls. Among the coated pieces, some had the larger nanoparticles and some had the smaller ones. Some from each of those groups had been degraded by the tape, and others had not.

All four types of selenium coatings proved effective in reducing staph populations after 24, 48, and 72 hours compared to the uncoated controls. The most potent effects — reductions larger than 90 percent after 24 hours and as much as 85 percent after 72 hours — came from coatings of either particle size range that had not been degraded by the tape. Among those coatings that had been subjected to the tape test, the smaller nanoparticle coatings proved more effective.

Staph populations exposed to any of the coated polycarbonate pieces peaked at the 48-hour timeframe, perhaps because that is when the bacteria could take fullest advantage of the in vitro culture medium. But levels always fell back dramatically by 72 hours.

The next step, Webster said, is to begin testing in animals. Such in vivo experiments, he said, will test the selenium coatings in a context where the bacteria have more available food but will also face an immune system response.

The results may ultimately have commercial relevance. Former graduate students developed a business plan for the selenium nanoparticle coatings while in school and have since licensed the technology from Brown for their company, Axena Technologies.