Every now and then this flower amazes me, what about you?

Sunflower oil is proved to be very healthy and became a wide-spread cooking ingredient. Sunflower leaves can be used as a cattle food, while the stems contain a fibre which may be used in paper production.

Just yesterday researchers in the University of Queensland have discovered that sunflower proteins which is hidden in the seeds can cure cancer. So we can say that scientists have discovered a cheaper, plant based drug to treat cancer, that is a great news for those who can’t afford the usual ways nowadays. 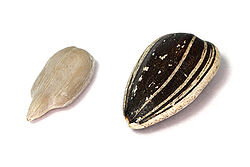 The study, published overnight in the international journal Nature Chemical Biology, showed that the machinery used to process and mature otherwise dull seed storage proteins is commandeered by a protein ring, SFTI, for its own use. While this work is of interest to researchers by providing an understanding of how new proteins can evolve and how proteins are matured, it has wider applications for drug production. SFTI can be used in its natural form to block breast cancer enzymes, and in a modified form to block enzymes associated with other types of cancer.
These proteins have not been broadly adopted by drug designers despite their potential to fight cancer because of the expense of producing them using traditional, synthetic manufacturing methods.