According to the newly published autobiography of Yang Liwei, head of China’s first manned space mission in 2003, the crew’s meals included dog meat from Huajiang county, which is renowned for its health benefits.

Don’t panic! the worst that can ever happened to you after eating dog’s meat is that whenever you go to a park,  you’ll  bark for 3 days…

Strawberries may be ideal crop for Space Farm of the Future

Astronauts on long space voyages would probably get pretty tired of freeze-dried meals, so scientists have long been trying to figure out how to grow space food to supplement their diets. According to researchers at Purdue University, strawberries may be one space-friendly crop. They say a low-maintenance strawberry cultivar called Seascape would do pretty well in space. It produces fewer berries than other cultivars, but they’re bigger and just as tasty

Sodium chloride always forms simple cube-shaped crystals. That was before a gang of mad potato chip scientists got their hands on it. In response to the Food and Drug Administration’s imminent consideration of regulating the amount of sodium food manufacturers can include in consumer goods, Pepsico, whose Frito-Lay division makes Lay’s potato chips, is redesigning the good old salt molecule to make it healthier.

The Future of the Hot Dog

According to both common sense and the American Academy of Pediatrics, there are two truths about hot dogs which neither science nor industry can afford to ignore: kids love hot dogs, and hot dogs are the perfect size and shape for a child to choke on. To wit: “If you were to take the best engineers in the world and asked them to design a perfect plug for a child’s airway, you couldn’t do better than a hot dog,” one AAP doctor said.

As such, the hot dog is in need of a redesign. So the folks at Fast Company took a look  at California design house RKS’s quest to cook up a completely rethought hot dog, and they did it using a design tool that is decidedly child-approved: the Play-Doh Fun Factory. 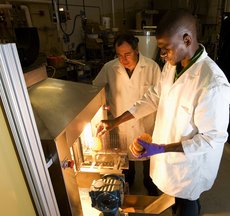 A Radiant Cooker that can deep fry foods without Oil

An oil-free deep fryer, which its inventor hopes could hit the market later this year, could let health-conscious consumers have their donuts and eat them, too.

Call it an infrared-wave, radiant fryer, or miracle oven — it makes french fries with half the fat, no engineered chemicals like Olestra, and the same crispy, oily goodness we all know and love.