The History of Clocks

You have a watch on your wrist, a clock in your cell phone, you can find something to tell you what time is it anywhere and anytime. Have you ever asked yourself  Who Invented the Clock? When and where was the clock invented?

The Sun Clock
1-The Ancient Egyptians were the first to really took timekeeping to a new level with the invention of the obelisk ( it was a tall slim structure with a pointed top that told the time by throwing a shadow that moved in a semi-circular rotation, allowing the Egyptians to segment a horizontal disk and tell the time.
2-It was the Egyptians that discovered the Meridian Line, a line joining North and South, by observing that the shortest shadow cast by the obelisk would always point in the same direction, regardless of the season. It was about this point that the center of the dial was marked as midday.
3-They also discovered the longest and shortest days, measured at midday.
4-As time passed and knowledge was gained the Egyptians created smaller sun dials, although it was soon learned that telling the time accurately with a small device was much harder due to the fact that even though the shadow cast was much sharper, it was much more difficult to accurately segment the disk.
5-The sun dial moved from Egypt into Greece and later Rome.
6-The Romans improved the device further by developing the hemicycle, a sort of hollowed out sun dial in the shape of a half bowl that added further to the accuracy of timekeeping and also allowed much smaller devices to be made. 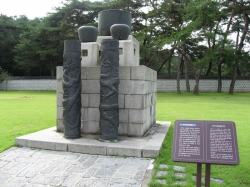 The problem with sundials was that they only worked when it was sunny. At night or on cloudy days, you were out of luck. This led to the invention of the water clock.
Some water clocks were used like hourglasses are today, to mark minutes.
The Egyptians used water clocks in around 1400BC, The principle was simple – fill a container with water and allow it to flow at a constant rate into another chamber that then operated some sort of float mechanism that moved a lever to show the hours. Various methods were used to maintain a constant water flow, the most common being the use of a constantly overflowing funnel, thereby ensuring that the same head of water was maintained at all times.
The only problem with these clocks was their poor accuracy. As time went by various methods were used to make the flow of water more accurate but it was the Chinese that appear to have made the most accurate water clocks around the 11th Century.
A Chinese monk by the name of Su Sung designed a huge clepsydra in the year 1092. Five stories high with numerous automata, the device was run by a very large water wheel that moved similarly to that of a modern clock escapement. Every quarter of an hour the wheel would turn, advancing all the other cogs and gears and opening and closing doors that released the automata.
It may be that this was the first mechanical clock as we know it today with its gears and pulleys, even though it still relied on water as its power source. Nevertheless, it is the first known use of a mechanical escapement and as such proved to be many hundreds of years of its time.

Mechanical Clock
The clock as we know was first invented in the 13th Century, a clock that used weights to drive a drum containing mercury. The mercury passed into each segment of the drum and slowly filtered through holes in the separating pieces, thereby controlling the rate at which the drum turned. This is of course a similar escapement to the one water clock created by Su Sung in 1092.
Most of these early clocks were quite large, expensive and certainly were not clocks made for personal use. The clock for the home came with advances in escapements and a new power mechanism.

1-The spring driven clock, the earliest known example dated at 1450.
The spring driven clock was certainly a technological advance but timekeeping didn’t improve as a result. As yet there was no method of keeping the power to the escapement constant. As the spring wound down so the clock would slow down. After it was wound up the clock would run faster.
2- Then the fusee was invented about 1485. It was the solution, the fusee is a device that spread the force exerted by the unwinding spring in a more even manner.
3-Galileo Galilei was the first to study the motion of the pendulum in 1602. His studies were followed later by Christiaan Huygens, who patented the first clock using the device. Huygens’ clock, using a short pendulum inside a wooden case proved to far more accurate than existing clocks and this led to the development of better and more accurate clocks. Later the pendulum’s length was increased and accuracy increased again. The increased length of pendulum required a longer and larger wooden case and it was this development that gave birth to the longcase clock.
Over the time, more creative clocks were developed. There were candle clocks, incense clocks.

In 1577, Jost Burgi invented the minute hand. Burgi’s invention was part of a clock made for Tycho Brahe, an astronomer who needed an accurate clock for his stargazing.

And in 1504, the first portable (but not very accurate) timepiece was invented in Nuremberg, Germany by Peter Henlein. The first reported person to actually wear a watch on the wrist was the French mathematician and philosopher, Blaise Pascal (1623-1662). With a piece of string, he attached his pocket watch to his wrist.

According to the Smithsonian “In 1927, Canadian-born Warren Marrison, a telecommunications engineer, was searching for reliable frequency standards at Bell Telephone Laboratories. Building on earlier work in piezoelectricity, he developed a very large, highly accurate clock based on the regular vibrations of a quartz crystal in an electrical circuit” – the first quartz clock.

Then came along the digital clocks. Which is available as hand watches, home clocks and as watches in cell phones and computers. The digital clocks work by lithium batteries.

At last the clock in recent times started to be like the first clock that works by the sun, but of course in a very different way. The clock works on solar power or can alternatively be powered by single replaceable lithium battery.

Who sells and buys watches?

They have many years of experience in selling brand new, unused quality watches and are now expanding their business to the world of vintage watches at VintageWatchAgency™. They offer their clients the opportunity to sell an existing watch or to trade it for a new one, or a vintage watch. They also purchase pre-owned watches without trading, from both companies and individuals. Every watch is checked and tested before it’s put on the site in order.

All watches are sold with a minimum of six months retailer´s warranty, and all pre-owned and used watches are of course verified for authenticity, see their section How It Works. At VintageWatchAgency™ you can also sell your watch on commission, they take the lowest fees in the business for photographing, servicing and marketing your used watch to get you the best price possible. They offer a wide variety of payment options, including bank wire transer, Pay-Pal and all major credit cards.

Their goal is to give you the perfect combination of an attractive assortment, quick and informative customer support and secure e-commerce solutions. No matter if the question is selling, buying or trading vintage watches – VintageWatchAgency™ is the answer.

USED CLOCKS & WATCHES VINTAGE – VINTAGE WATCHES ™
They have many years experience in selling new quality acidic and are now expanding their business with vintage watches via VintageWatches ™. They offer their customers the opportunity to sell their watch , swapping it for a new watch or a used watch. They also buy retro clocks from companies and private individuals with no claim to barter. All used watches checked and tested before being put on sale in their web shop.

All watches sold at least six months dealer warranty and all second-hand clocks authenticity verified. Read more about this on their website. Their goal is to give you a perfect combination of attractive range of vintage watches, quick and informative customer service and a secure e-commerce solution. Whether it comes to the sale, purchase or trade-in of vintage watches – is VintageWatches ™ web shop for you.

Read more about me here.
All Posts
Love this post? Link to it from your blog! https://www.scienceandinventions.com/the-history-of-clocks/
PrevPreviousMost Dangerous Computer Viruses
NextModern Science Latest DiscoveriesNext