Thomas Alva Edison ( 1847 – 1931) was an American inventor, scientist, and businessman. Edison is considered one of the most prolific inventors in history, holding more than a thousand U.S. patents in his name, as well as many patents in the United Kingdom, France, and Germany. He is credited with numerous inventions that contributed to mass communication and, telecommunications. His advanced work in these fields was an outgrowth of his early career as a telegraph operator.
He developed many devices that greatly influenced life around the world, including: 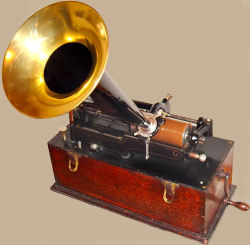 The phonograph, The first great invention developed by Edison was the tin foil phonograph. While working to improve the efficiency of a telegraph transmitter, he noted that the tape of the machine gave off a noise resembling spoken words when played at a high speed. This caused him to wonder if he could record a telephone message. He began experimenting with the diaphragm of a telephone receiver by attaching a needle to it. He reasoned that the needle could prick paper tape to record a message. His experiments led him to try a stylus on a tinfoil cylinder, which, to his great surprise, played back the short message he recorded, “Mary had a little lamb.”

The word phonograph was the trade name for Edison’s device, which played cylinders rather than discs. The machine had two needles: one for recording and one for playback. When you spoke into the mouthpiece, the sound vibrations of your voice would be indented onto the cylinder by the recording needle. This cylinder phonograph was the first machine that could record and reproduce sound created a sensation and brought Edison international fame.

A long-lasting, practical electric light bulb, Edison is probably best remembered for his work with the light bulb, although he didn’t make the very first light bulb (that distinction goes to Humphry Davy), it was Edison and his team that found a filament that made the light bulb a practical technology. Early light bulbs required huge amounts of electricity and at best lasted only a couple hours. In 1879, using lower current electricity, a small carbonized filament, and an improved vacuum inside the globe, he was able to produce a reliable, long-lasting source of light.

The Kinetoscope and The moving Picture Machine, another Edison invention was the Kinetoscope, a box containing a strip of photographs. When one looked into the box while the strip was moved, the objects in the photos appeared to be moving. He later invented the Edison Moving Picture Machine, an early cinema projector.
Edison set up the first film studio in 1893 and there his assistant Charles Batchelor experimented with combining moving pictures and sound. The Edison Studio produced the first talking motion picture in 1912.

He also invented a mechanical vote recorder, a battery for an electric car, electrical power, recorded music and motion pictures. Edison originated the concept and implementation of electric-power generation and distribution to homes, businesses, and factories – a crucial development in the modern industrialized world.

1 thought on “The Inventions of Thomas Edison”