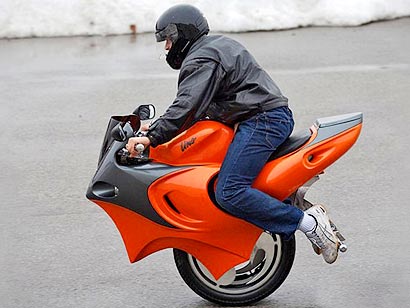 It may look like the most dangerous motorbike in the world but this new invention is actually the latest form of green transport.

The electric Uno is the brainchild of 18-year-old Canadian Ben Gulak who spent several years developing the bike, which is controlled entirely by body movements.

The machine actually has two wheels, side-by-side, and uses gyroscopic technology to stay upright. It moves in the direction the rider leans – and the more you lean, the faster you go.

Ben claims that the bike could help beat pollution and he was inspired to design it after visiting China and seeing all the smog there.

He says: “The bike is fairly easy to ride, but takes a bit of getting used to because you have to learn to trust it.”