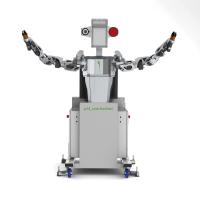 Pi4- workerbot
The Fraunhofer Labs has developed a factory robot (Pi4- workerbot) that work side by side with the humans.

It has the size of  an average human when it stands, it has two arms with fingertip sensitivity, it is equipped with three cameras and a variety of facial expressions. But unlike humans it can work 24 hours a day, and it would prefer to stay busy, it smiles when it keeps busy all the time. If it looks bored, it means that he is waiting for work.

Because its swivel shoulder and rotating wrist, it can carry a housing and a gear, one in each hand and carefully engage them together and then put them on the conveyor belt.

It has a 3-D camera on its forehead and two other cameras to see its surroundings but with much more greater precision than a human eye.

The pi4-workerbot is capable of making many more movements than a normal robot.