The Egyptian Pharaohs believed in the second life after death; For them, eternity was the real life. And that was the main reason for their great concerns about the mummification of the dead bodies of their kings, queens and everyone that had an important position in their era.

The Egyptian Pharaohs used to put everything which the mummy might need in the other life like food, money, jewelery……etc.

Even though, so many secrets had been revealed by scientists in relation to the mummification process, but till this moment scientists still working on discovering and revealing other secrets that are considered a big mystery in that great civilization.

Now it is very interesting that you learn about the mummification operation.

The process of the mummification has two stages:

First, the body is taken to the place of purification. There the embalmers wash the body with good-smelling palm wine and rinse it with water from the Nile.

One of the embalmer’s makes a cut in the left side of the body and removes many of the internal organs. It is important to remove these because they are the first part of the body to decompose.

The liver, lungs, stomach and intestines are washed and packed in natron which will dry them out. The heart is not taken out of the body because it is the centre of intelligence and feeling and the man will need it in the afterlife.
A long hook is used to smash the brain and pull it out through the nose.

The body is now covered and stuffed with natron which will dry it out. All of the fluids, and rags from the embalming process will be saved and buried along with the body.

After forty days the body is washed again with water from the Nile. Then it is covered with oils to help the skin stay elastic.

The dehydrated internal organs are wrapped in linen and returned to the body. The body is stuffed with dry materials such as sawdust, leaves and linen so that it looks lifelike.

Finally the body is covered again with good-smelling oils.

First the head and neck are wrapped with strips of fine linen. Then the fingers and the toes are individually wrapped.

The arms and legs are wrapped separately. Between the layers of wrapping, the embalmers place Amulets to protect the body in its journey through the underworld.

A priest reads spells out loud while the mummy is being wrapped. These spells will help ward off evil spirits and help the deceased make the journey to the afterlife.

The arms and legs are tied together. A papyrus scroll with spells from the Book of the Dead is placed between the wrapped hands.

More linen strips are wrapped around the body. At every layer, the bandages are painted with liquid resin that helps to glue the bandages together.

A cloth is wrapped around the body and a picture of the god Osiris is painted on its surface.

Finally, a large cloth is wrapped around the entire mummy. It is attached with strips of linen that run from the top to the bottom of the mummy, and around its middle.

A board of painted wood is placed on top of the mummy before the mummy is lowered into its coffin. The first coffin is then put inside a second coffin.

The funeral is held for the deceased and his family mourns his death. 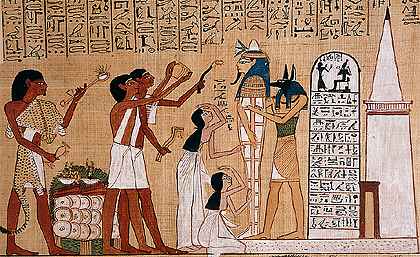 A ritual called the ‘Opening of the Mouth’ is performed, allowing the deceased to eat and drink again.

Finally, the body and its coffins are placed inside a large stone sarcophagus in the tomb. Furniture, clothing, valuable objects, food and drink are arranged in the tomb for the deceased.

Now his body is ready for its journey through the underworld. There his heart will be judged by his good deeds on earth. If his heart is found to be pure he will be sent to live for all eternity in the beautiful ‘Field of Reeds’.