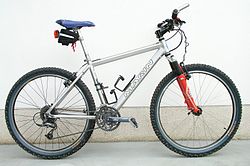 Daymark made a wireless bike, it is not completely wireless in fact as there are a little bit wires that are hidden in the front wheel hub. They called the bike the shadow ebike. The wheel is also supplied with several gadgets as a USB port, an LED battery power display, regenerative breaks, and a charging port.

The Shadow eBike’s wireless attributes means that there are no electrical connections exposed to the elements, removing the possibility of accidental severing or short circuiting. All of the bike’s circuitry is in-frame, including its electric motor, lithium polymer battery, magnetic regenerative brakes, throttle and the pedal-assist functions which use a 2.5 GHz frequency-hopping “spread-spectrum technology”. As such, Toronto-based Daymak feel justified in calling the Shadow “the world’s first wireless power-assist electric bicycle.” Daymak offers the Shadow eBike equipped with either a 250W or 350W electric motor, and a 36V 10AH lithium-ion battery that can provide an average range of around 12 to 15 miles running on just motor power. With pedal-assisted power, this range is extended to 22 to 25 miles. The battery takes between four and five hours to completely recharge and is good for 750 to 800 cycles. The bike’s wheel also doubles up as a generator able to charge devices via the USB port, and a regenerative braking system sends a current back to the batteries.

Students at MIT have developed a new bicycle hub motor that contains the motor, batteries and motor controller all within the hub. Attached wirelessly to the electric motor in the wheel there is the handlebar-mounted throttle. They called the new bicycle the GreenWheel.

The potential advantage of this enclosed system is that if you want to give your bike an electric boost, you only need to change the wheel, not purchase a whole new steed.The hub motor is spoked into a standard bicycle wheel and is powered by Lithium ion Nanophosphate batteries supplied by another MIT firm A123 Systems.
No details on motor power output or battery capacity have been made available but range is expected to be an estimated 25 miles (40 km). Pedaling the bike doubles the range under electric power provided the rider isn’t traveling at the nearly top speed of 30 miles an hour (48 kmh). The bike can be charged by pedaling or by plugging it into the electric grid. A123 batteries can be fully charged in only 10-15 mins.
Both front, rear or both wheels on any bicycle can be powered with a GreenWheel and the team estimates its range at 40,000 miles (64,000 km), or about eight years work of travel at an estimated 20 miles (32 km) per business day.

Terry Hope, the Canadian inventor who created the KPV, created the Solar Cross ebike that harness the solar power to help the rider to power the bike.

Hope started out with a stock 18-speed Specialized FSR mountain bike. While a road bike would have been lighter and offered less rolling resistance, he told us that he needed a double crown suspension fork in order to mount the two front solar panels over the front wheel. The bike also has a third handlebar-mounted panel, along with a 24-volt 1-horsepower motor, a 5000 mah (milli Ampere hour) lithium-ion polymer (LIPO) main battery, two 5000 mah LIPO booster packs wired in series, and a 24-volt controller.

Terry built the solar panels himself, out of eighth-inch polycarbonate sheeting, aluminum, and 18 x 6 x 6-inch (457 x 152 x 152-mm) mono crystalline cells. In order to keep the weight down, he drilled thousands of holes through the aluminum parts. The cells each put out 3.8 to 4 watts, together providing an estimated 8.7 volts of electricity. Using the controller, riders can assign them to charge any two of the three batteries.