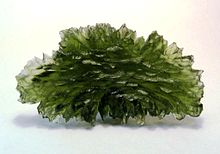 Glass is a non-crystalline solid substance, the glass is a fragile and transparent material.

We can find natural glass as quartz after the lightning hits the sand. Artificial glass is made mainly from the silica which is a chemical compound of silicon and oxygen, it reaches to 70% to 74% of the glass manufactured. Also there are different materials that is added to form a different kind of glass.

7000 years ago the Ancient Egyptians used glass, as there were different objects made from glass in the tombs of the Pharaohs. They were adding cobalt, manganese or copper to the sand to have colored glass. Later, after about 4000 years they started making molds to shape the glass.

The Sumerians, Assyrians and Babylonians also used glass, that was about 5500 years ago.

The idea of the industry of glass was transferred to Greece and by the 1st century the Romans became the center of glass industry, and they made the finest samples from glass. The Romans were the first to use the glass to cover the windows instead of the animal hide, wood or cloth.

The glass was used as lenses for the first time, when Both Pliny and Seneca at the beginning of the 1st century, used a glass globe filled with water as a magnifier.

Mirror made from glass coated with metal was first made by the Phoenician in the first century.

By the 10th century, Ibn Sahl (940-1000) the Persian physician and mathematician, calculated the shape of lenses.

The refracting telescopes were the first form of telescopes, they appeared first in Netherlands in the year 1608, it was made by Hans Lippershey and Zacharias Janssen. Galileo improved it in 1609.

Recently the glass has been used in several industries, as the Cd’s used in the computer, the ceramic glass and a lot of other uses.