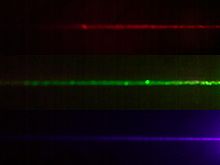 LASER stand for Light Amplification by Stimulated Emission of Radiation,  you can find other details about LASER if you checked the post on our site about LASER.

But who invented that marvelous invention?

Einstein was the first to find out about lasers as he had a research about radiation in the year 1917. He suggested that stimulating atoms by energy will release a beam of light.

Before the LASER there was the MASER that stand for Microwave Amplification by Stimulated Emission of Radiation. Maser is electromagnetic waves which is close to laser but it is  invisible rays, while the laser is a concentrated beam of visual rays.  Maser was invented in the year 1954 by Charles Townes born in the year 1915 and Arthur Schawlow (1921-1999), they are American physicists. The maser applications were confined only as an amplifier for radio signals and as a detector in the space researches.

The first scientist that reached the laser was Gordon Gould (1920-2005) an American physicist, He was a student of the maser inventor Charles Townes. Gouldbuild the first optical laser in 1959 but was not able to register its patent until the year 1977, at this period some other scientists were able to use his invention.

In the 1960, scientists started working on a visible maser. Theodore Maiman (1927-2007)
an American physicist, was the first to invent the ruby laser. Due to that invention Theodore Maiman was nominated for a Nobel Prize twice along with other prizes.

In the year 1962 Robert Hall born in 1919, an American physicist. He invented a new type of laser, the semiconductor laser which is used in the microwaves till today.

Hildreth “Hal” Walker Jr, born in 1933 an American, he invinted the laser telemetry and targeting systems.

In 2007 Dr. David Cassidy of the University of California, Riverside proved that a single  laser beam could  ignite a nuclear fusion reaction.

In 2008 Princeton-led team of researchers has discovered a new way to allow the common electronic materials to emit laser beams.