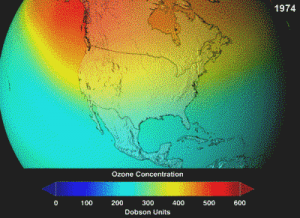 The Ozone layer main function is protecting the earth from the ultraviolet rays available in the sun rays.

Through the years 1928 till 1958, Gordon Miller Bourne Dobson (1889-1976) the British physicist was able to reach for the Dobson unit, the Dobson unit is able to measure the atmospheric ozone density.

By the year 1976 the US Academy of scientists, announced that the Ozone layer is depleted. The main reason of the ozone layer depletion is the increase of the amount of chlorofluorocarbons.

In the year 1984, Joseph Farman born in 1930, the British geophysicist, along with Brian Gardiner and Jonathan Shanklin, the British meteorologists, they discovered the Ozone Hole. The Ozone hole is a part of the ozone layer which became thinner than it was supposed to be.