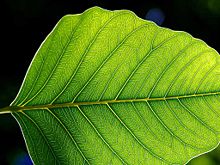 In the first half of the 17 century, Dr. Jan Baptisma Helmont (1579-1644) the Flemish Chemist and physician, was the first to search how the plant makes its food. He made an experiment to test the volume of the plant, he weighed the soil, and the plant. After the growth of the plant he remeasured the soil and the plant and assumed that the source of food in the plant is only water.

In the year 1772, Joseph Priestly (1733-1804) the English natural philosopher and chemist was the first to produce the benefits of the photosynthesis process. He was able to reach that conclusion when he proved that the plant can restore the air lost by the burning of a candle. He put a candle then a mouse in a closed jar and found that the candle burnt out quickly, then he proved that the plant can help the mouse to be active again.

In the year 1778, Jan Ingenhousz (1730-1799) the Dutch bilogist and chemist repeated the same experiment of Joseph Priestly. He was able to prove the role of sun light in the photosynthesis process.

In the year 1796, Jean Senebier (1742-1809) the Swiss pastor and botanist,  proved the importance of chlorophyll in the photosynthesis process along with the other factors sunlight, water and carbon dioxide and that sugar is produced and oxygen is released.

C. B. van Niel (1897-1985) was a Dutch-American microbiologist, he studied the purple sulfur bacteria and green bacteria and reached the chemistry of photosynthesis. He showed that the plant use the hydrogen and reduces

In the year 1939, Robert Hill (1899-1991) a British plant biochemist proved that oxygen is evolved in the process of light reactions in the beginning of the photosynthesis process.