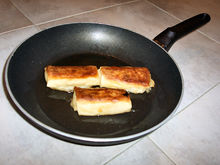 Polytetrafluoroethylene (PTFE) is the chemical name for the teflon. Teflon is the material that allow the unistils to be non stickable. As the teflon has a very slippery surface, which does not allow any materials to get through or stick to it. Teflon is a material that has no odor nor color.

Roy Plunkett (1910-1994) the American Chemist was the first toinvent the teflon in the year 1938, while working in DuPont.

We can say that teflon was discovered by accident as Plunkett was trying to reach for a completely different material to be used in chlorofluorocarbon refrigerant. While he was working the pressure bottle stopped spraying and when he examined it he found that the bottle contains had polymerized spontaneously into a white, waxy solid material which he later called polytetrafluoroethylene or PTFE.

It was firstt used in the year 1948, as a material that covers the seals and valves of the pipes that transfers the uranium hexafluoride.

It was first used in coating cooking pots by the year 1954, when the French engineer Marc Grégoire coated the first pan

Later it was used in other applications as coating the cars wiper blades, in the industry of all-weather clothing, it is also used in eyeglass lenses and even as fingernail protector.